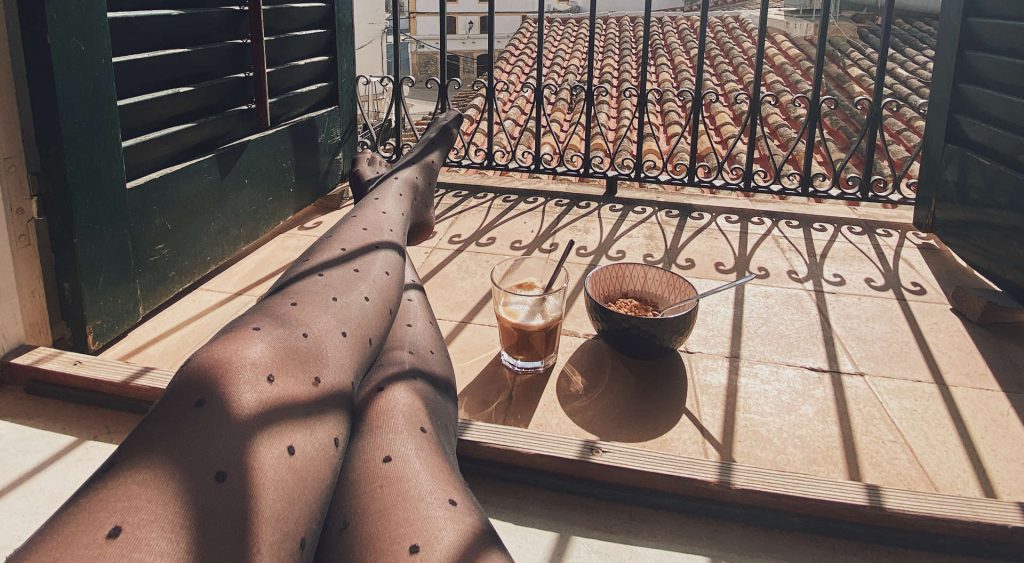 Hello from my studio in Ibiza

When my father drives me home in the evening, just before the curfew starts, we pass an information board on the highway. “Stay in the Netherlands. Together against Corona.” It sounds so obvious. When I let the words sink in, I realise that I wish it were that easy: to stay in the Netherlands. In my own little house, in the city that I can call home, close to my family and friends. And yet, although that is all very important to me, I am now writing this from my studio in Ibiza.

I couldn’t take it any more

If there was one thing I did not expect, it was that in the second month of 2021, the year when everything would be better, I would be writing this article from my studio in Ibiza. Being in a long-distance relationship is challenging, but doable. Add a pandemic to that and it becomes practically impossible. It was no longer workable. The amount of stress around news and measures. The travelling. I felt like a criminal when I was flying from the Netherlands to Spain for love. The trip I made in January, which was quite traumatic, was the last straw.

Once in Ibiza, I was very reluctant to fly back home. But I had to. With having a chronic illness, type 1 diabetes in my case, you can’t just decide 1, 2, 3 to stay somewhere without all your medical supplies. It takes some preparation and planning. Day by day, the idea of moving temporarily to Ibiza started to appeal to me more and more. No more stress about flights and not having to watch the news all the time. Therefore, in order to hopefully distance myself from all the drama and stress, I started to investigate the possibility of staying in Ibiza for the time being.

Finding a studio in Ibiza

Despite the fact that my boyfriend is the reason I’m in Ibiza now and it’s kind of a given that I’m staying with him, we chose to find a place of my own. And if I’ve learned one thing about Ibiza in the short time I’ve known the island now, it is that finding a place to live is quite difficult. Because: ridiculous prices and a lot of hassle with contracts and bureaucracy. Via Idealista, a well-known housing website in Spain, I found an affordable studio in Dalt Vila: the old town of Ibiza. It was almost too good to be true that I actually found something in my first search attempt. I sent a WhatsApp message to the real estate agent in the morning. In the afternoon I could view it and the next day it was a done deal.

How I got my NIE

Living on Ibiza is one thing, but getting around on the island is another. In the Netherlands, I am used to doing everything on foot, by bike or by public transport. On Ibiza, you won’t get very far with that. To buy a car, you need to have an NIE (Número de Identificación de Extranjeros). You can see this as an identification number for foreigners. The next opportunity for an appointment to arrange this was two months later (!!), and of course I had no time or desire to wait for that. So, without an appointment, I went to the relevant department at the police station. It was already late in the evening (so maybe not the best time), but the friendly policeman who was still there said I could come back the next morning.

The next day, I was welcomed almost like a queen. Everyone was very friendly. I was led past the queue of waiting people, suddenly had two policemen as interpreters and walked out the same day with my NIE! I still can’t believe it. The funny thing is that in the end we decided not to buy a car, so the NIE was a bit ‘for nothing’. Until… I was told in a not so friendly way at the airport when leaving Ibiza that the borders were closed and only residents of the island were allowed to return. “Do you have a NIE?” With a big smile on my face, I could answer with: “Yes”. No car, but a golden ticket to return to my boyfriend.

It is not a holiday, unfortunately

When I tell someone that I am temporarily living in Ibiza, I mostly get reactions that are focused on the weather or a holiday. I find that quite difficult, because being here has nothing to do with holidays for me. In fact, it is sometimes quite difficult. It looks nicer on the outside than it really is. I miss my house and my home, but I do my best to make it a home here as well. In Ibiza, just like in the Netherlands, there is a lockdown. Everything is closed. There is also a curfew here. Enforcement is strict. And despite the fact that I moved (temporarily) for love, some more private circumstances make that I am alone quite a lot.

But… I try to make the best of it. I try to explore the island on the weekends and my studio feels more and more like home. It’s like a burden has been lifted from my shoulders now that I can just be with my boyfriend, without all the stress concerning corona and travelling. And that is what it was all about in the end.