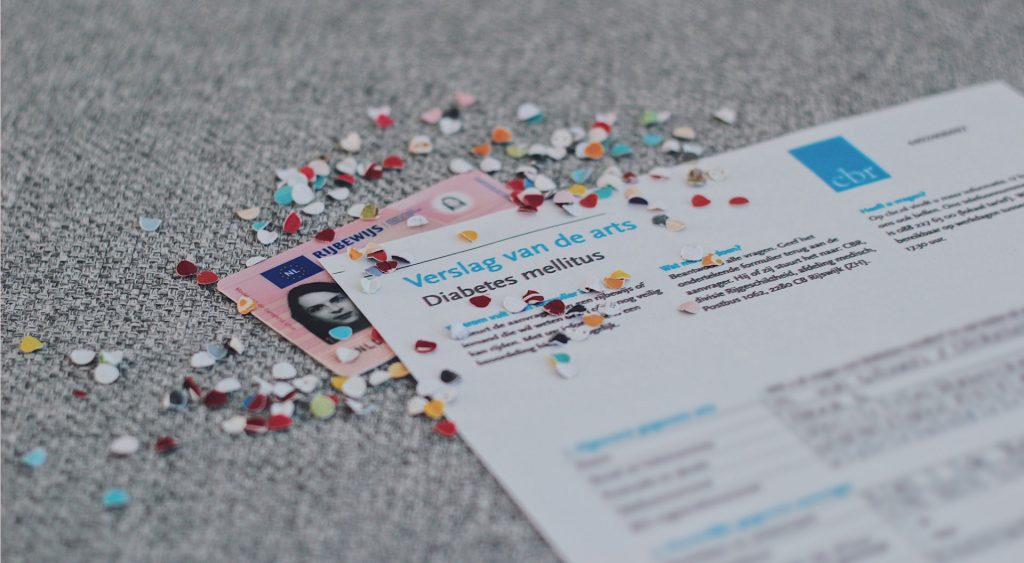 Renewing your driver’s license when having diabetes

Applying for or renewing your driver’s license can be more difficult if you have diabetes. I deliberately say ‘can’, because it doesn’t always have to be that way. For example, I renewed my driver’s license without any problems and it wasn’t too bad. I was even a bit disappointed afterwards because I had wasted four months of validity by doing it so early.

Everyone is different, no one is the same

When I heard that my driver’s licence was shorter because I have type 1 diabetes, I reacted rather irritated. Because why? I can drive just fine. Even with diabetes. But there are indeed certain risks that ‘ordinary people’ don’t have. For example, getting a hypo when you don’t feel it coming. Nobody is the same. And therefore no one with diabetes either. So it’s understandable that they want to check ‘us’ more often.

A terrible process, long waiting times and a lot of frustration. If you believe the internet, applying for a new driver’s licence when you have type 1 diabetes is no walk in the park, far from it. The CBR gets a lot of negative publicity and everywhere it is mentioned that it is a long and tiresome process. I was only reading up on it and I felt discouraged before I even started.

Online, it is a lot of horror stories, which gives a distorted picture. And that is something I would like to change. Because for me, renewing my driver’s licence actually went very smoothly. And I’m glad I can share my success story, also to balance out the horror stories online a bit.

As a result of all the negative experiences I had been reading about, there was a reminder in my calendar six months before my driver’s licence was due to expire. This way I was ‘sure’ I would have enough time for the process and would not get into trouble. It’s not like I have a car parked out front and actively use my driver’s licence, but I like to get these things done right, and on time.

The application to the CBR

Because I had decided to report to the CBR that I have diabetes, I requested a health statement at the end of the month (the 29th). I paid €37.80 for this. I thought it was a ridiculous, but that’s how it is. Filling it out online was very easy and took only five minutes. Immediately afterwards, I received word that I had to be examined by a doctor because I had stated that I have diabetes. The form that the doctor had to fill in was three pages long and I could download it immediately. And all of that in just fifteen minutes!

The examination by my doctor

That same day, I called my doctor to make an appointment. And I must admit that I was a bit lucky; I could visit the doctor the very next day. On the 30th, together with my doctor, I filled in the form, which I then sent to the CBR by post three days later. A bit old-fashioned unfortunately, not everything is digital yet. I ‘lost’ three days in the process myself, because I could have sent the form in on the 30th.

The decision from the CBR

As I said before: everybody is different, nobody is the same. For me, it all went very easily and quickly, but there is no guarantee that it will be the same the next time.

What’s your experience with renewing your driver’s licence when having diabetes?