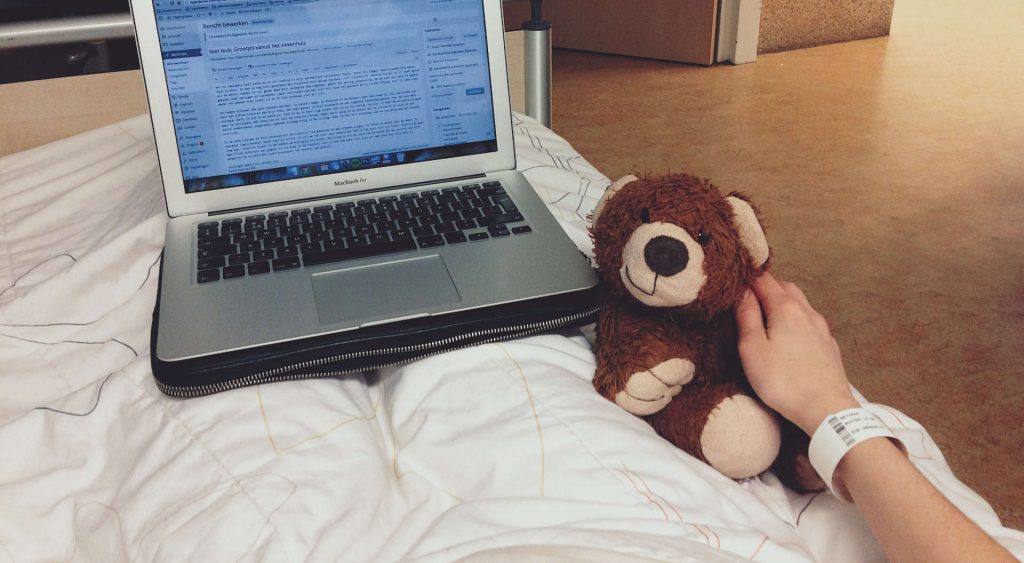 The diagnosis of diabetes; hello from the hospital

It is now half past seven and I am sitting upright in my automatically adjustable bed. Next to me there are two friendly ladies. I think so, I haven’t spoken to them yet so maybe they are not friendly at all. Anyway, they can snore like the best of them. Although I have tried to put in my earplugs, that didn’t help much. I am woken up every few hours for measurements and in between I sometimes feel very sad, because it is just too much.

How it all started

In January, I started to run fanatically, but that was soon put to an end by a minor knee injury, a nasty feeling in my upper abdomen and a general feeling of tiredness. It will pass, I thought. When I still didn’t feel fit in March, I decided to go to my GP where I was referred to the internist. In early April, I went to see the internist and a number of tests were carried out. Next Tuesday, I get the results of these tests, but I guess we can skip that appointment.

In the week before my appointment with the internist, some strange things happened. I drank a lot and as a result had to go to the toilet more often. And when we talk about a lot, I am talking about 4.5 litres in one day. As soon as my glass was empty, I was in the kitchen again to fill it up again, that’s how thirsty I was. At the optician’s I was told that the strength of my eyes had deteriorated considerably and to top it off, I also lost four kilos of weight, which is quite a lot for me, as I have now reached a record low in terms of weight.

Playing doctor of your own

So I started browsing online. “The first result I get is a link to a website about chronic diseases, diabetes. Very thirsty, drinking a lot, peeing a lot, tiredness, weight loss, feeling of hunger, drowsiness, deteriorated and/or double vision, reduced resistance. OK. Quite scary. I’m not going to have diabetes, am I? Nah, I just shouldn’t read so much about illnesses. Just wait for the results from the internist. A week later I started to feel the urge and decided to impulsively buy a glucose meter. Why not? At least then I can see that nothing is wrong and I can put it out of my mind, it’s as simple as that.

When I came home from work yesterday, the glucose meter had been delivered and I decided to take a measurement right away. A small pen, a little blood into the meter and then the result was: “High”. Okey… According to the manual that would mean that my blood glucose level would be above 33.33 mmol/l. Which is pretty extreme since a normal blood glucose value should be between 4 and 9. Anything higher or lower is not okay. I decided to do another test and the result was “High” for a second time. Huh, this device must be broken. My boyfriend and I decided to check his blood glucose level. The result was exactly what you would expect, so the device worked fine. Oh well, I would just call the GP and/or internist the next day.

Off to the hospital

It kept haunting me and I decided to call the emergency room. The high value was bothering me and the assistant could probably advise me whether I could indeed wait until the next day or whether I should come in for a visit. An hour later, we were at the emergency room and my blood glucose level had gone to 25. “Well, then we have a new diabetic” – Wow. Okay. Well, then we know. What I didn’t know at the time was that I would be admitted to hospital straight away. The values that I have now are far too high and they have to come down as quickly as possible.

The hospitalisation after the diagnosis of type 1 diabetes

On arrival at the hospital, all kinds of tests were done and around half past one in the middle of the night, I was driven to my room in a wheelchair, which I found very strange as I can still walk just fine. In the meantime, I have had three more infusion bags, had my finger pricked 4-5 times, and am connected to an insulin pump.

Do you know what the strange thing is? I don’t quite realise it yet. The fact that I’m in a hospital is strange to me, because I’ve never been admitted to a hospital before. But the strangest thing is the fact that I have diabetes. Just like that, from one day to the next. A chronic illness that will affect me for the rest of my life. With finger pricks, insulin injections, keeping an eye on everything because my body can’t do it all by itself anymore. And I’m only 24. Hello, get a hold of yourself. Why does this exist? Why me? So many questions. I think the realisation will come later. For now, I hope we can get it under control and I can go home soon.