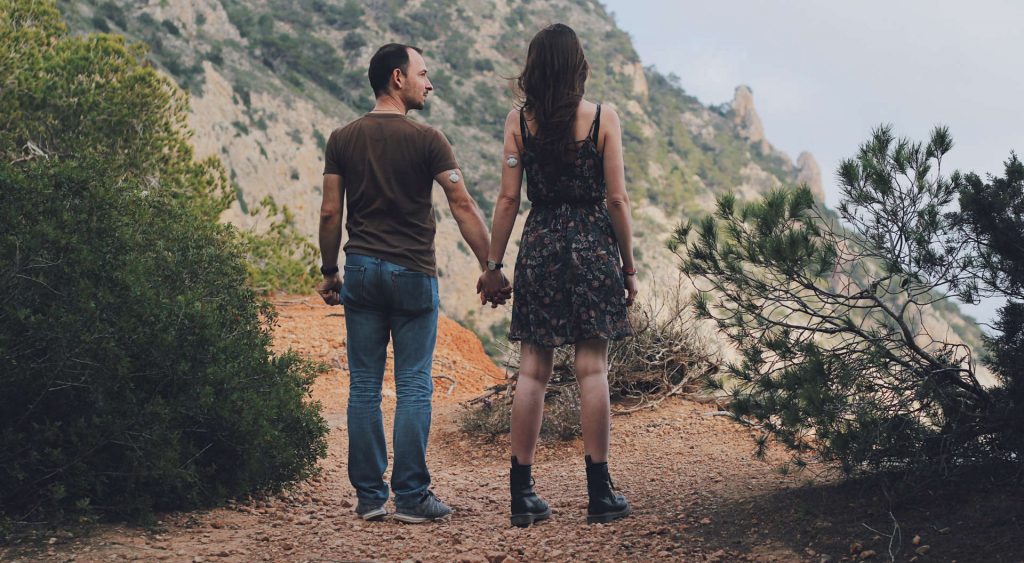 The impact of living together with someone who has diabetes

To provide more insight on what it is like to live with someone who has diabetes, I asked my boyfriend ten questions about his experience of living with me: a young woman (half cyborg), diagnosed six years ago and wearing an insulin pump and a sensor. In this conversation we cover his first encounter with diabetes, how living together with someone who has diabetes affects him and his life, and the advice he would give to those that are new to having a loved one with diabetes.

1. What did you know about type one diabetes before you met me?

2. How did you react when you found out I have diabetes?

I think the first thing that came to my mind was like: “Okay. What is that?”. But I also think that’s a good thing. Because a lot of people have superficial knowledge. “There’s a friend of my mother’s, who has a friend that has diabetes and actually if you have a pump it does it all for you.” Which, of course, isn’t exactly true. But all of these misconceptions that people have can be very annoying for someone who actually has diabetes, especially in the form of advice and indications.

My reaction was mostly curiosity and I still think I’m quite curious about it. I asked a lot of questions, a lot of them repeatedly and I am sure that was quite annoying, like: “Carbs, what is that, again?” Of course, it took a while for the complete picture to come together in my head.

3. How would you describe the process of learning more about diabetes?

It was an incremental process. I like to think about it like a very intricate artwork that you see from far away. You see the colours. You see the shapes. The general idea. But when you get closer, you see a lot of details. And for me it was a bit like that. Because first I got the general idea, like: “Okay, so you eat food, and that drives up your sugar…” And I couldn’t understand why. Because fries don’t have sugar. “And then you need to do something about it by using this pump to put insulin in, so it works.” And of course, that’s it in a nutshell, but over time I learned how complex it really is.

4. What surprised you most about diabetes during that learning process?

That there is way more complexity to it than I thought and there are a lot of factors that influence diabetes. It’s not just the food you put in your mouth. It’s your stress levels. It’s your current blood glucose level. It’s your current trend. Is it going up, or is it going down? It’s your insulin sometimes. It’s your infusion set. It’s all those things. And I think that’s complex enough, not to mention the different amounts of time it takes to metabolise different types of food. And as if that is not enough, if you’re a woman you have extra complexity due to all the hormonal changes that have to do with the menstrual cycle. So that’s quite a lot.

5. What do you think is the biggest misconception about diabetes?

I think the biggest misconception is the idea that if you have a pump you are cured, and the pump does everything for you. It’s as if you don’t have diabetes anymore. It’s the pump’s problem and it’s no longer your problem. And of course, you have all these advances in technology in recent years such as closed-loop systems and all things. But it is important to understand that they are not a silver bullet; they are not going to solve your problem. If those systems make mistakes, you could potentially die from a sugar low. And yes, they are getting better and better, but it’s not like the human is going to be removed from the equation any time soon.

Another misconception that comes to mind is: “Oh, you have diabetes so you can’t eat sweets or sugar anymore.” Whereas actually you can. But you have to be very conscious of what you are doing and what you put in your mouth.

6. How would you describe living with someone who has diabetes?

I don’t think it’s much different from living with a healthy person. Some people ask: “Can you smell it when her sugar is high?” No. I can’t. “Can you tell by her mood if she’s high or low?” No, not really. It does make me feel kind of bad, as a boyfriend. But it’s certainly not a dramatic change to your relationship life, in any way. It often happens that it’s the other way around. That I keep going on and on about diabetes and I ask so many things and I try to understand all these impossible correlations between this, that and the other and then I’m told like: “That’s enough for now. I want to forget that I have diabetes for a while.”

7. Does the fact that I have diabetes influence your life?

Not significantly. If you have diabetes, you have to weigh the food you eat and you have to give enough insulin to compensate for the amount of carbs you will get, so from that point of view it’s useful to eat the same things each day. Then you have better control of what’s going on. And for example, with my breakfast for example I was already doing that in order to keep my mornings  simple. But even so, we don’t have to eat the same thing for breakfast. We can each do our own thing, and it doesn’t have to influence the other.

8. What would you say that changed the most?

The thing that has changed the most is my understanding of diabetes. I now know that it exists, that’s already a big step. And I know there are two types and I know a lot about type one. I can explain it much better to others now, for example. At least on a basic level. I don’t really know much about type two.

9. You wore a glucose sensor for a week, how was that?

The idea of the experiment was to look at the blood sugar levels of a healthy person and a person with type one diabetes and compare them but also to see what the healthy body normally does. We ate more or less the same things and expected a 5.5 flat line all the time. But we saw that this was not the case at all. It was a bit lower on average than 5.5 and it also fluctuated quite a bit. We did an experiment with drinking one litre of sugary drinks to get a sugar high but it didn’t work out very well. Which is a good sign for a healthy person. The blood sugar went up, but it wasn’t enough to consider it a sugar high.

What did work, and was interesting, was not eating for a long time and then eating at a random time. The body at that time wasn’t prepared to receive food and then two things happen. You get a sugar high: it peaks and your body goes crazy and overreacts to that. The next thing that happens is that you get a sugar low. The high I had was 10.6 and the low was 3.4, which made me feel like I was shaking from hunger even though I had just eaten. Another thing that surprised me during the experiment is how easy it was to forget I was wearing a sensor. I expected to be aware of its presence at all times, but that was not the case at all.

10. What would you say to those that are new to having a loved one with diabetes?

Life is quite complex and stressful and we all have our struggles and challenges to face. And it often happens that we are so drained that we need the help and support of our loved ones to cope with those challenges. And having diabetes adds an extra layer of complexity on top of what life already throws at you.

As someone with diabetes, there are times when you are on top of everything and there are times when you are burnt out and you can’t take it anymore. It’s a bit like people who start exercising and then stop after only two weeks. But not exercising is an option. It won’t kill you. But pretending you don’t have diabetes is not and it will have severe consequences. So, supporting your partner in managing type one diabetes is really needed sometimes.

There are many ways to help. You could say: “You have to do this or that.” But also you can say: “Let’s do that together.” It’s very important to really support each other and create the right environment to make the right things happen. And with diabetes, there are a few things that need to happen. You have to weigh the intake of carbs. You have to compensate properly, and not just make up numbers while staring at a bowl of pasta. It is very draining and sometimes there are moments when there is not enough willpower left to deal with it. And then, instead of doing the right thing, it becomes a random guess of 23 carbs with high blood sugar as a result. What a partner can do in these situations to prevent this, is to help when things get difficult. Make sure the food is weighed. Make sure there is some kind of insulin compensation and that it is proportional to the number of carbs.

So, in summary: be supportive, create the right environment and help with those little things that are actually very little for you as a healthy person but make a world of difference to your loved one.